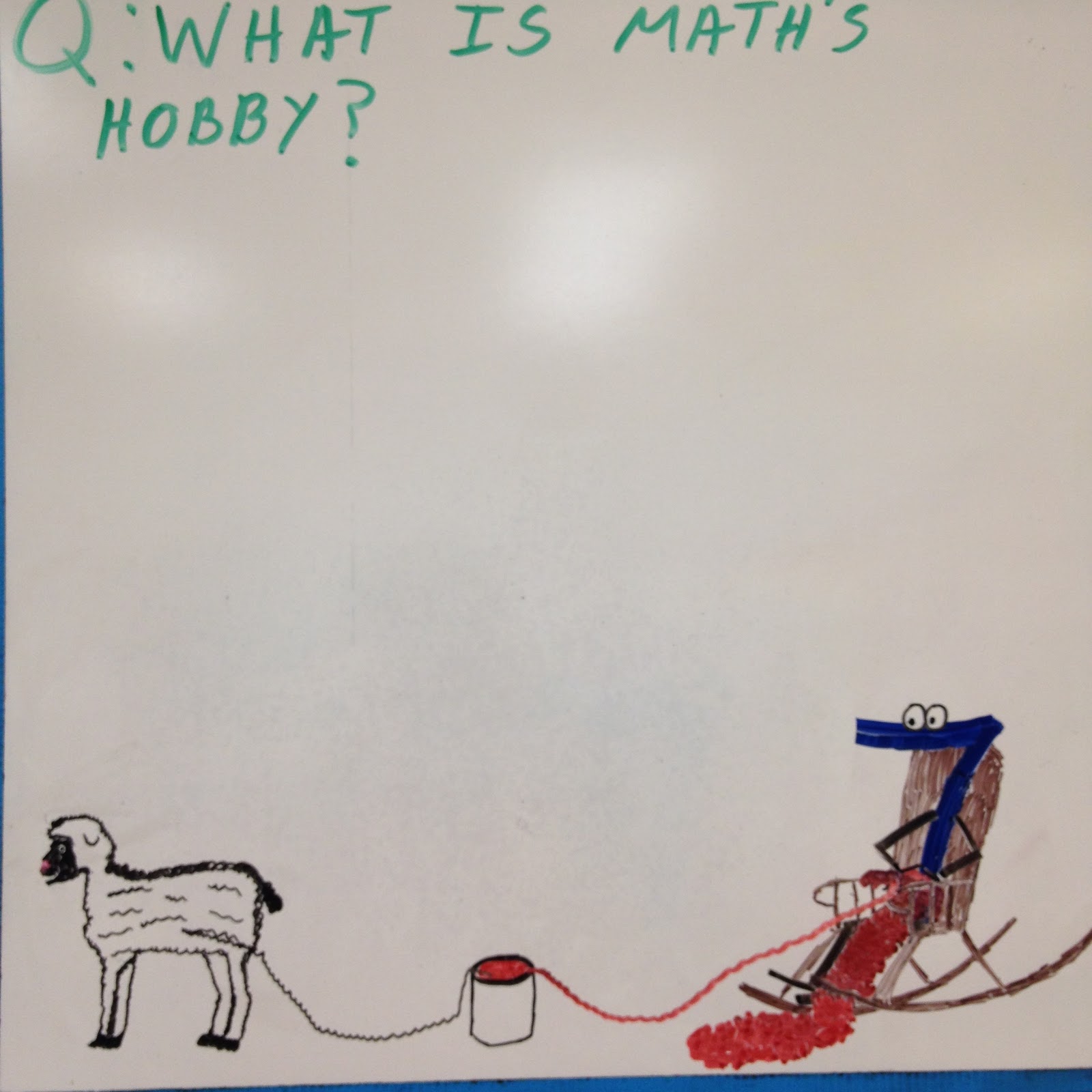 Then pen that I use for my Promethean Board has been shorting out lately.  What this means is that certain parts of the board work just fine while on others, I have to push VERY hard to a response.  This essentially makes my board from an interactive whiteboard into a giant projection screen in the middle of my writing space.

In geometry, I wanted us to explore quadrilaterals but I wanted to do so on a grid to illustrate the points I wanted to make.  I don't have a dry erase grid and trying to create one by hand would have made a bigger issue. 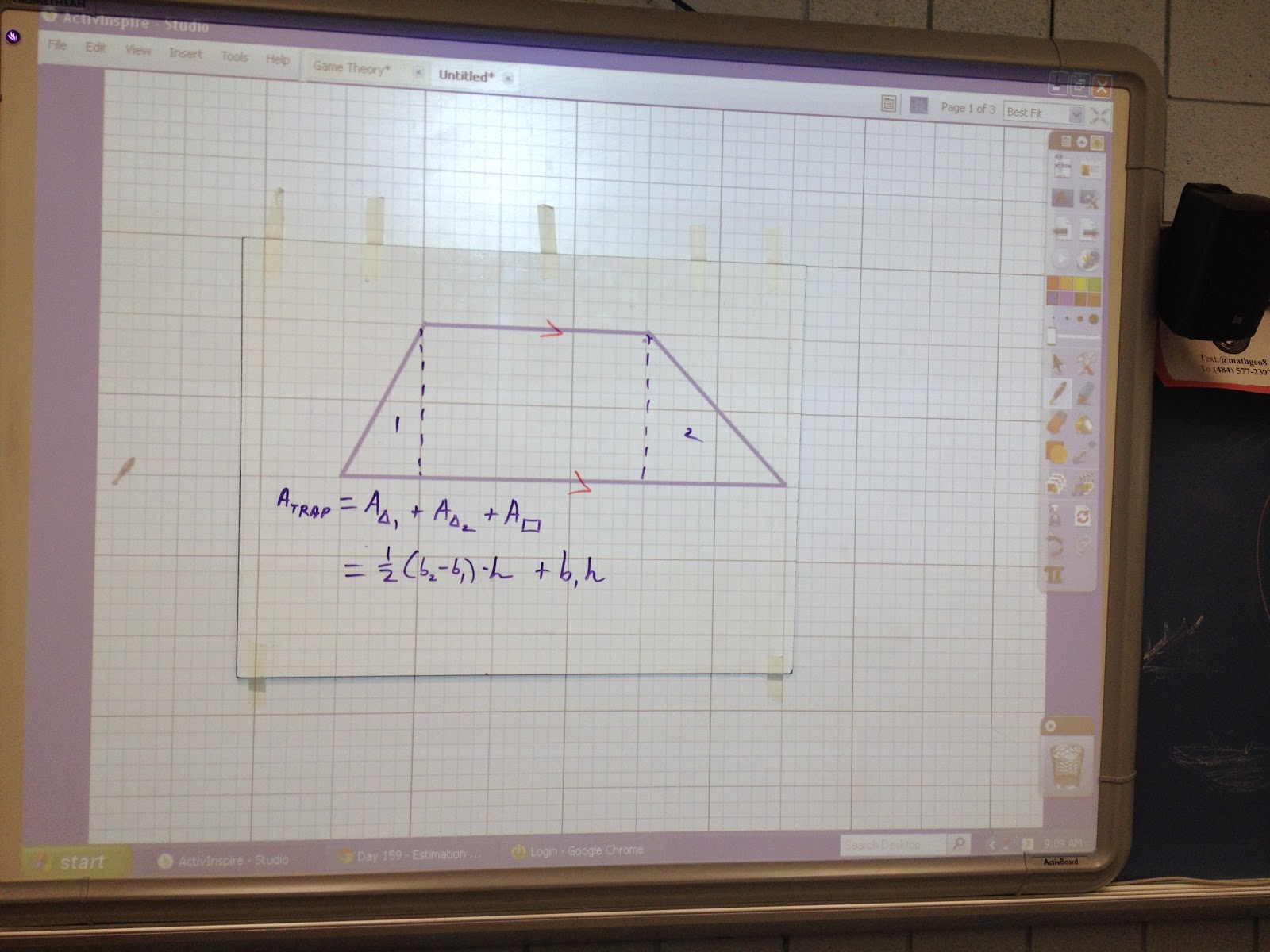 Why, yes! I DID tape a dry erase board to my Promethean board! And it was glorious!

It looked even cooler when the screensaver for my laptop came on. 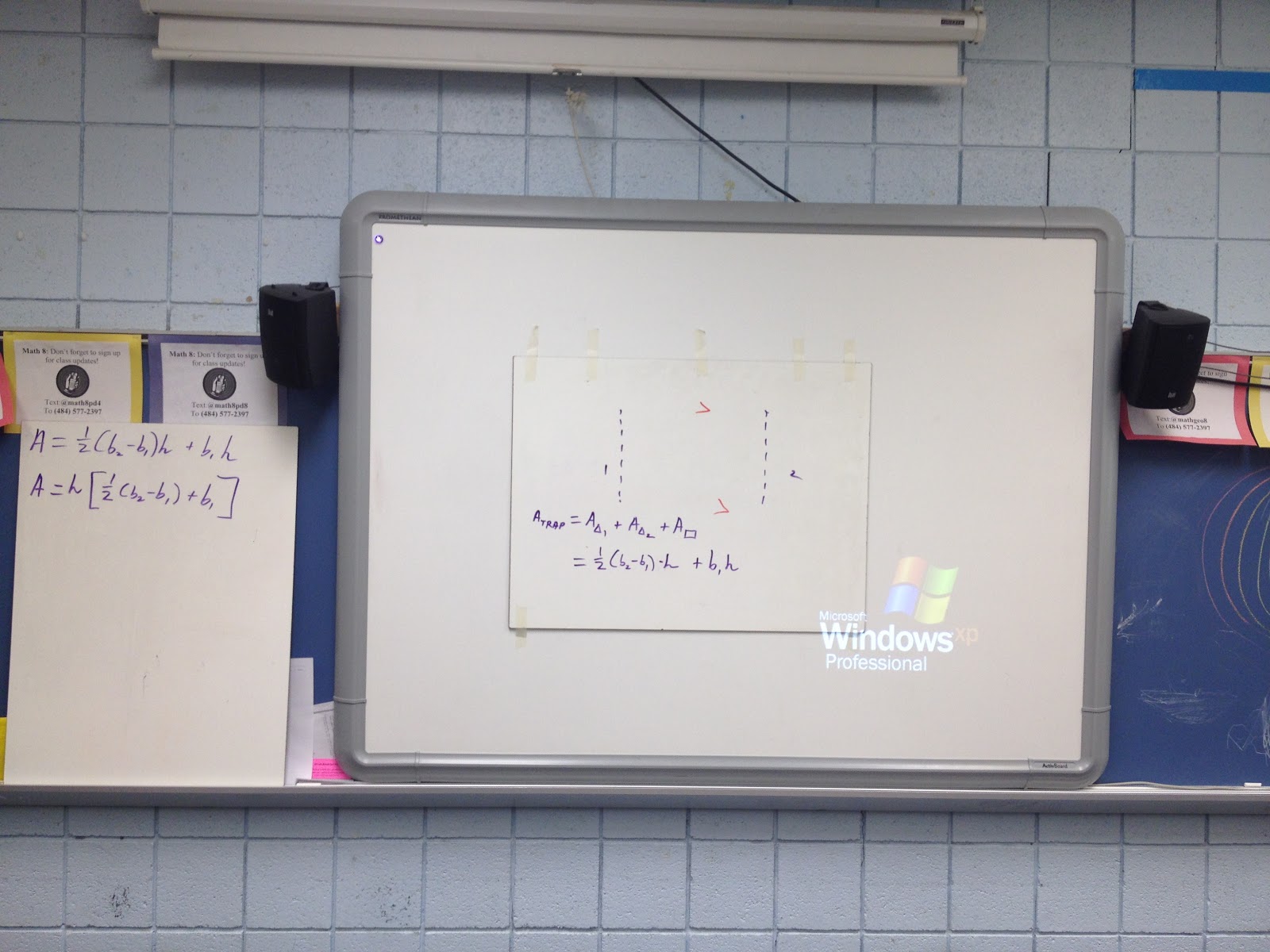 It turned out that my geometry kids spent the day bullying our tech guy into getting me a new pen, which I now have and it works great!

I was very pleased with how this impromptu lesson went.  I started by asking them what they knew about rectangles and triangles.  After listing several attributes, we eventually got where I wanted: area.

At this point, I put a parallelogram on the board and asked how we might find the area of that.  We had a very interesting discussion about splitting it into two triangles and a rectangle, finding the areas of each of those and combining all of those.

They quickly discovered that, in a parallelogram, the two triangles that they created by drawing altitudes were congruent to each other.  We talked about what that meant and what we could do with it.  Eventually, someone suggested that we move one triangle to match up with the other and make a rectangle.

I used this as an opportunity to discuss why the formula for area of a triangle is related to the formula for the area of a rectangle.  I let them choose variable names for the lengths of the various sides, so it looked like a jumbled mess, but it was all part of the plan (sort of.)

Once we combined the areas of the triangles and the rectangle, messed around with the variables and made it pretty, they were able to see that the formula for the area of a parallelogram was the same as that for a rectangle.

"What about other quadrilaterals?"

I drew a trapezoid on the board, purposely drawing one that was not isosceles.  When we started looking at it, they tried the same tactic as before, but quickly found that since the triangles on the side weren't congruent, they needed to do something else.  We talked about it for a bit and looked at a few different ideas.

One student suggested that, since we can find the area of the rectangle in the middle, we pull that out and put the two side triangles together.  The base of that triangle would be the length of the bottom of the trapezoid minus the length of the top.

We did some algebraic manipulation and ended up with the standard formula for the the area of a trapezoid.  We also talked about how, since we couldn't move one triangle to the other side, we could cut each triangle in half vertically and flip the missing piece up to the top to make a rectangle.

My favorite part of this lesson, the part of which I am most proud, is when a student asked me "What are we looking for? Where are we trying to go?" and my reply was "I have no idea. We are just exploring!"

Formulas are great, but they are even better when the kids come up with them on their own.  If they can't create new ones, the next best thing is to have them discover why we use the existing ones.

One of my favorite activities to do in Algebra 2 is to use the method for completing the square to derive the quadratic formula.  I love seeing and having students see how math is interconnected.  Too often, we fail to create or illuminate those bridges and, as a result, students think that math is just random formulas with no real origins.

Any sufficiently advanced mathematics is indistinguishable from magic.  Part of the job of a math teacher is to pull back the curtain.


By the time the pre-algebra kids got to my room, the temperature had jumped to 82 degrees and everyone was pretty subdued.  They took a chapter test and worked on front-loading vocabulary for the next chapter.

By the time class ended, it was 85.
Email ThisBlogThis!Share to TwitterShare to FacebookShare to Pinterest