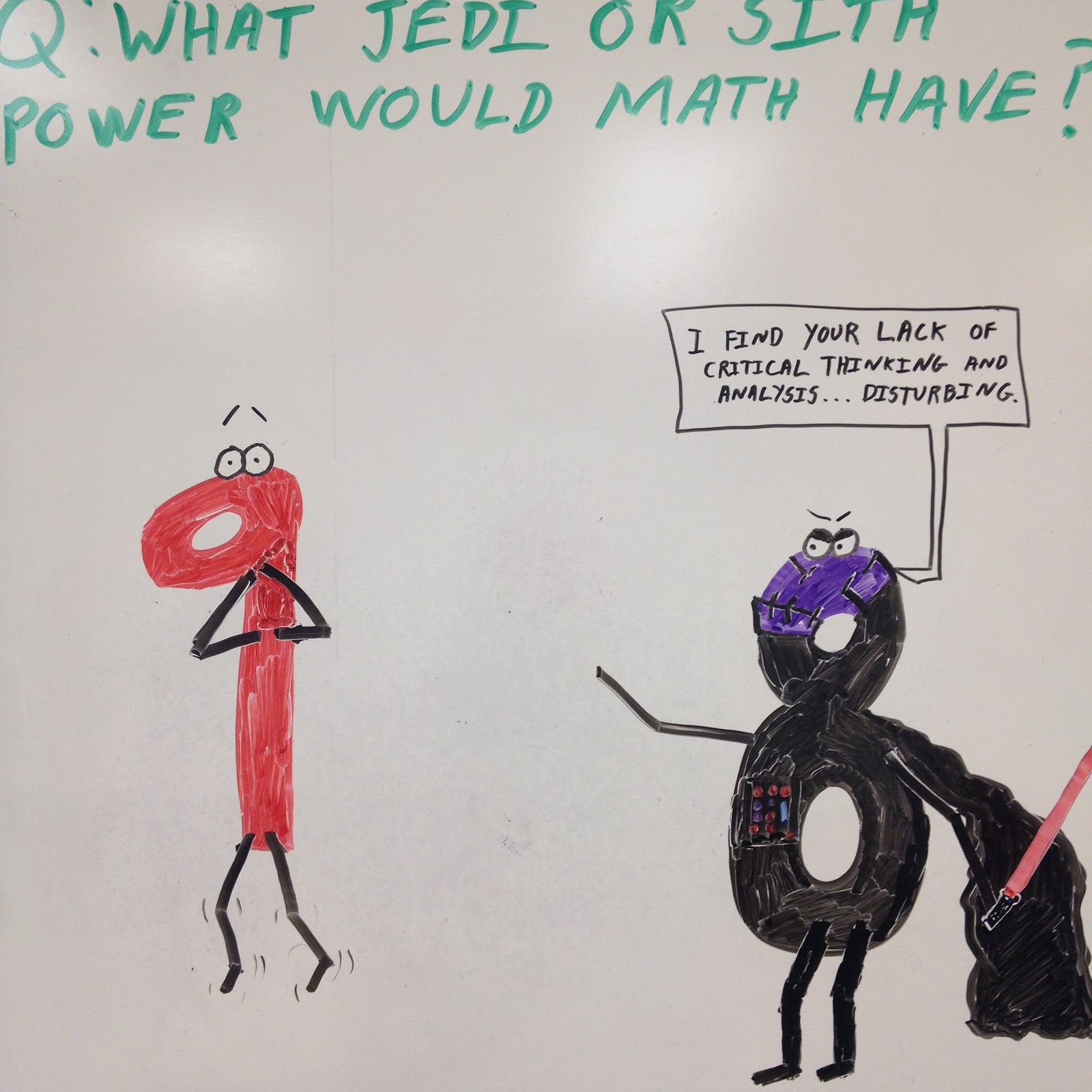 Today, the groups in geometry had to do a mini-pitch to me about their games.  They were required to have a rough sketch of their board (if they were using one), a list of their contents, the rough draft of the rules and directions and a brief summary about what math was involved in their games. 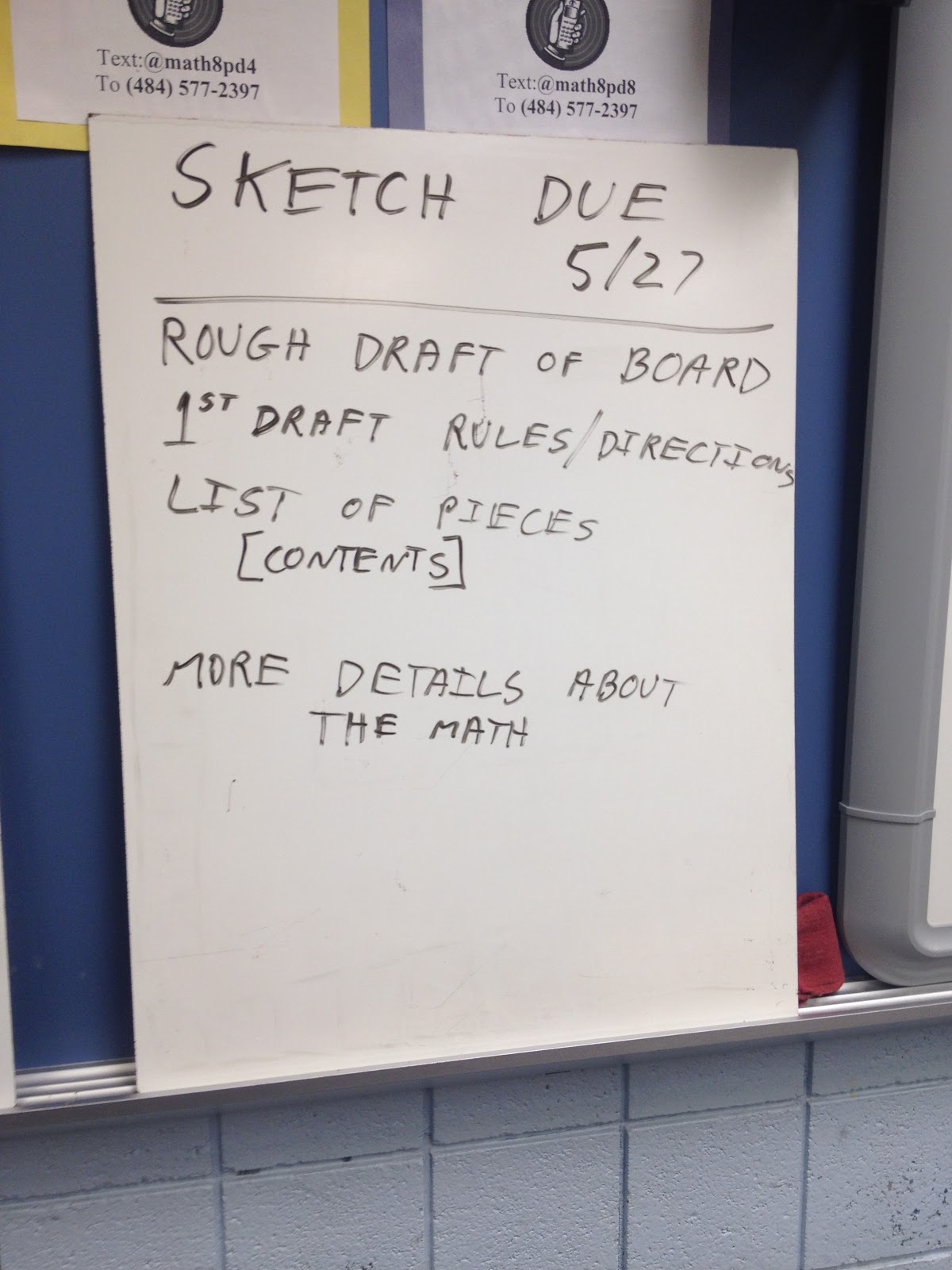 I am stunned, not only by the creativity of my students, but also the variety of games in terms of content, structure and target audience.

A few of the groups, I think, threw their ideas together with minimal thought and accidentally came up with fantastic ideas.  They seemed genuinely surprised to hear me say so.

My goal for today was to see what progress they had made and to help them continue moving forward.  I made suggestions with each group, doing my best to convey that they were, in fact, only suggestions and not requirements.  I suggested to a few groups that they scale their games up, seeing what elements they could add to increase the "fun" factor, while I suggested simplification for others.

One group has a game designed for ages 6-10 while another has a game that should probably be played by high school students and older.  Yet another group has a card game that I think is so versatile that it could be played by people of any age and has the potential for multiple difficulty levels.  This group gave off the impression that they weren't serious about their game.  "This seems like a good idea, I guess."

It's a brilliant idea!  I hope that my enthusiasm was able to help light a fire for them.

The styles of games also vary greatly, from a SET-like card game to a board game with rotating circular tiles to a lateral thinking and puzzle game to a game that uses a catapult!

Overall, I'm amazed at what they are producing and I can't wait to play the games next week!  They will continue working on them this week with the next due date being Friday.

On Friday, each group must have a working, playable model of their game.  They can have cards be on torn pieces of paper, but it must be playable.  During that time, they will play their own game, each person taking notes of what they like, what they don't and how to improve.  Next week, they will be making those corrections and coming up with a final copy.

Next Thursday and Friday will be game days.  The finished product will be due on Thursday and other groups will play the games, rating them on replayability, fun factor, ease of play, etc. and providing constructive feedback to the creating group.

The groups will then have the weekend to make whatever finishing touches they need to make with the VERY final copy (ready for distribution) due on Monday, June 9th.

This is an incredible project and I know I keep saying how amazed and stunned and shocked I am, but that's because it keeps happening.  I am so proud of the ownership that the students have taken over these games and I want to play ALL of them!

There is exactly zero chance that I won't be presenting these games during the Middle School session at TMC this year!

Period 4/5 did very well today.  My increased effort to remove students who are destructive to the learning environment seems to be yielding results.

In period 8/9, however, the same cannot be said.  I had to remove the same 4 students multiple times during the hour and a half, each time offering them the deal that as soon as they felt they could be in the room without being disruptive, they were welcome to come back in.  There seemed to be genuine confusion about why they kept being asked to leave.  "But HE was talking to ME!"

No amount of "I understand, but you are in charge of you and only get to decide how you react to others.  If they are talking to you, ignore them" seemed to penetrate into their heads.

I'm not sure what else I can do.  I feel as though I don't have the skill to adequately explain to them what they are doing wrong and how it is impacting the other students and the learning environment as a whole.

Not surprisingly, however, once they were removed from the room, the rest of the students really came out of their shells, volunteering answers and accepting that making mistakes was part of the process.

Funny thing about not fearing ridicule for risk-taking...

I hate the frequency that I've been throwing kids out of my room recently.  I console myself with the idea that I've given them ample opportunity to NOT be thrown out, but two thoughts keep occurring to me:

1) What ELSE could I be doing to prevent this? What other options do I have at this point in the year?

2) If I had done this earlier, could I have set the precedent that only productive (or at least non-destructive) behavior is allowed in my room?  Would there have been other repercussions that would make things worse?

I don't have answers to either of these thoughts.  I don't know if the answers even exists, but I do know I can't stop looking for them.

I am tired of having the same conversations over and over with the same students.  I don't have the interventions that are effective and I don't know how to work within the structure that I have.

I still have a ton to learn about interacting with middle school students.

I took my daughters to the park this weekend.  My older daughter is very friendly and social and has no trouble inviting other kids to play with her.  She found a new friend and they began playing Hide and Seek.  A boy, who couldn't have been older than 5 was also there.  My daughter invited him several times to play with them.  He refused each time.

While my daughter and her new friend played around the playground, the boy followed them around yelling out their hiding places to the other children playing.  They asked him again if he wanted to play and he again said no.  He did, however, continue to follow them around, sabotaging their game.  They eventually picked something else to play and the boy left with his parents, but I was struck by how similar that behavior is to what I see in my room.

As I near the end of the year and begin to reflect on the whole time and not just 1 day at a time, I'm coming to some very upsetting conclusions.
Email ThisBlogThis!Share to TwitterShare to FacebookShare to Pinterest