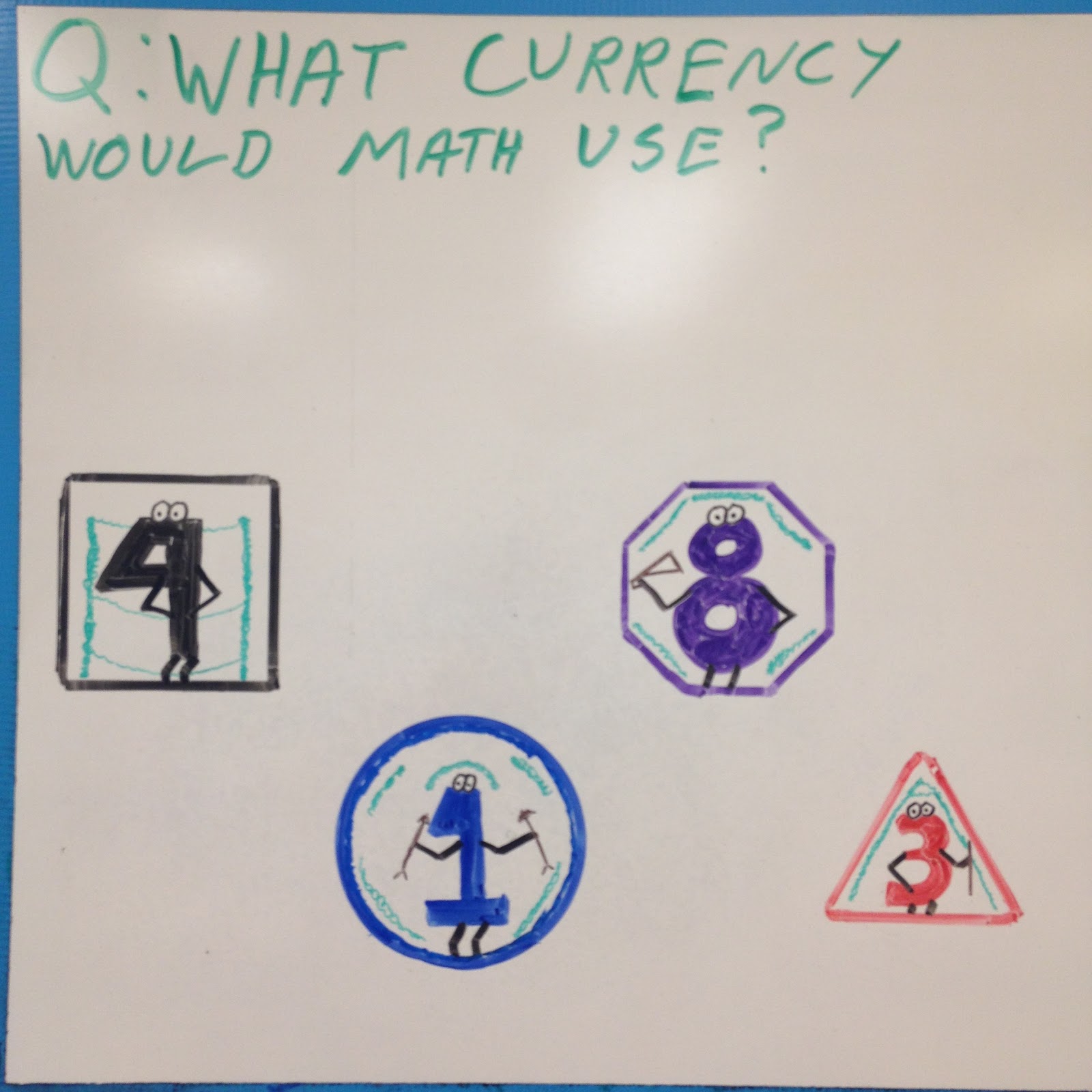 At 4 am, I woke up with an idea.  I left my bed, got out a notebook and leaned on the stove, getting down my thoughts.  I presented them to the geometry kids this morning.

For the remainder of the school year, we will be designing games.

I began today by asking them what makes a game into a "good" game.  It took them a while to get away from specific content such as "there should be weapons!" and into attributes such as "it should be simple to learn how to play."

We worked together to develop a list of attributes of good games. 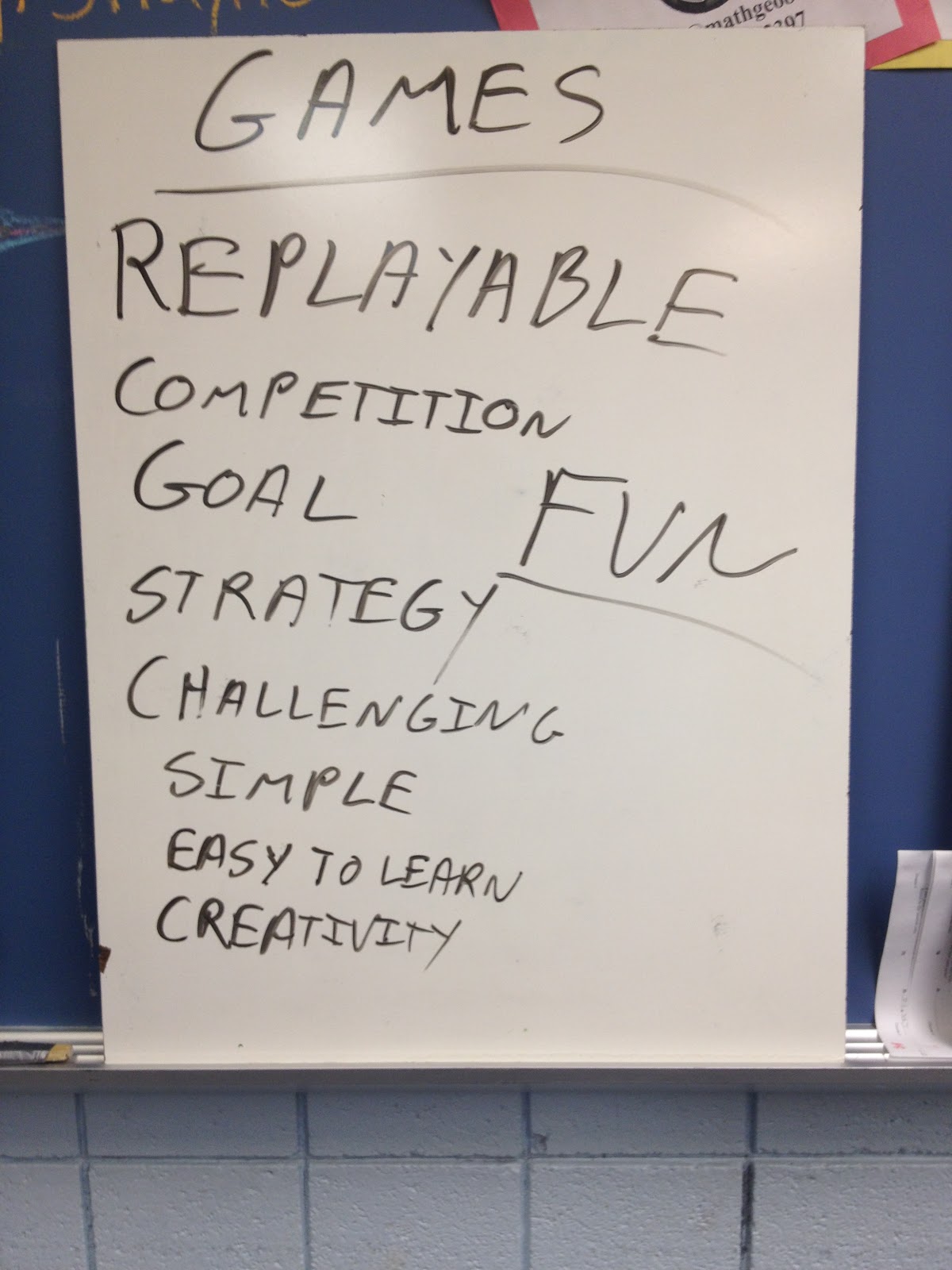 Then we talked about a timetable.  If I had had me as a teacher, I would have been eternally frustrated.  I was the kind of student who needed periodic due dates for projects.  Without something to turn in or complete each week or so, I always waited until the last minute and turned in terrible quality work.  You would think then, that as a teacher, I would be better at creating timetables for the projects that I assign.

I am TERRIBLE at it.

So I asked the students.  We discussed the various types of things that should be completed before the final project.  I drew a calendar on the dry erase board and I had them work in groups to develop a breakdown that would work for them.  Then we got back together and put it on the calendar. 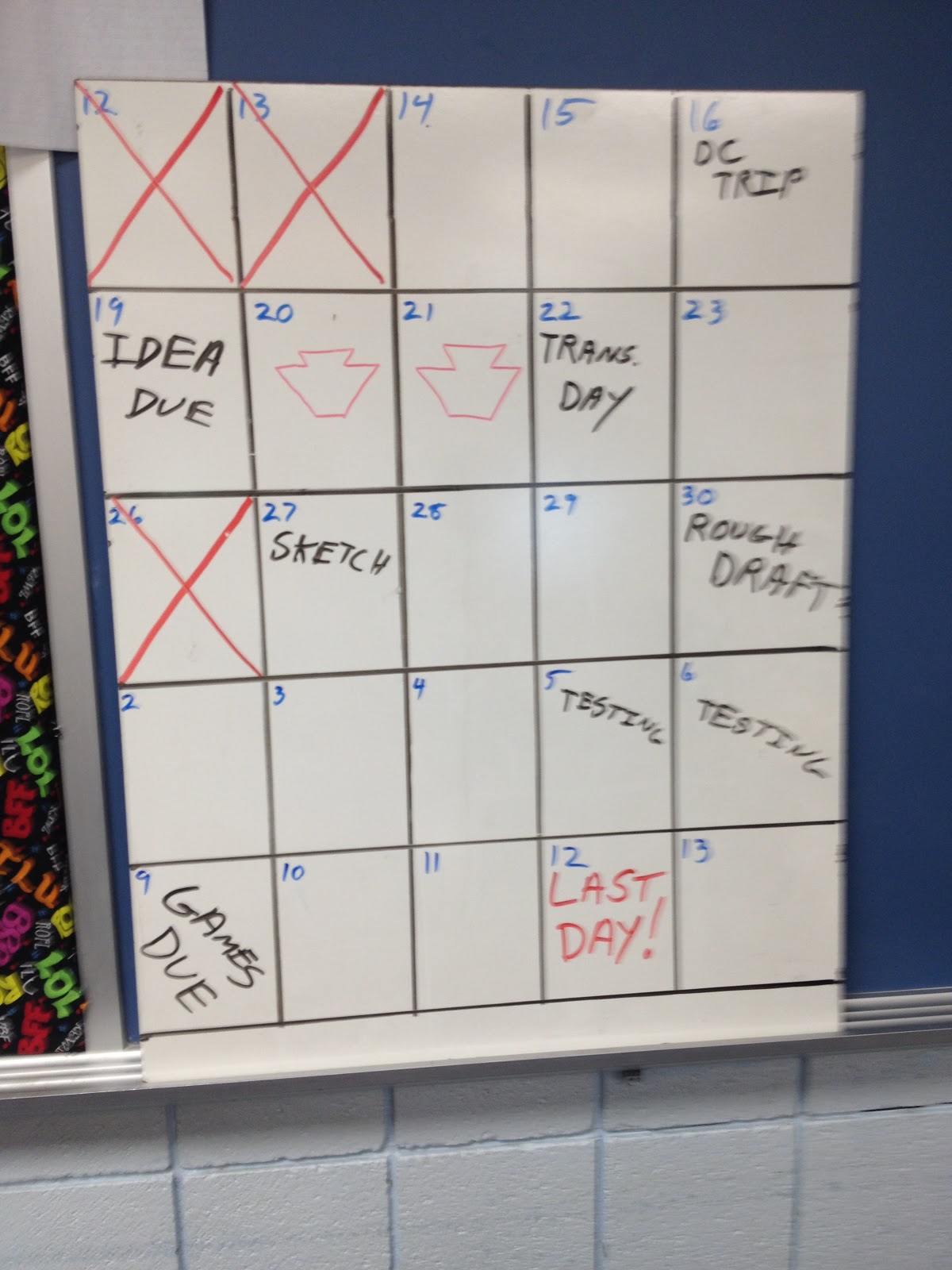 As we were making it, I realized that we have another round of testing coming up next week, followed by the Transition Day where the 8th graders are introduced to the high school.

The first upcoming deadline is this Monday.  On Monday, the groups will present their ideas to the class, not for approval, but for suggestions.  We will have a talk before they get started about how to provide constructive feedback.

Then I unleashed them to talk about their ideas with their groups.  Several groups called me over to ask my opinions on their ideas.  There were some amazing ideas that I hope end up as finished products.  One group described one of their ideas "that we're really excited about" as sort of a mash-up between reverse Jenga and Tangrams.  They were worried about building the actual pieces, so we talked about nets and possibly getting pieces of wood from the shop or Styrofoam from Michael's.

I showed them the Kickstarter video for "Primo" as an example of a math-based game and we talked about how the primary consideration is that it should be fun.  If it's not fun, it doesn't matter how much content is packed into it because no one would want to play.

I did not want it to be a quiz disguised as a game, but rather a game that involved math.

I have high hopes for this.  I also look forward to revising it over the next several years to make this assignment into something amazing.


In pre-algebra, we started talking about polygons and the sums of the interior angles.  I was able to use GeoGebra again, so I was pleased with that.  I started by drawing a triangle and asking the students to tell me everything they knew about it.  Eventually someone said "all of the angles add up to 180 degrees."

We used the GeoGebra angle tool to confirm that this was true.  Then I moved the points and we tried again with another triangle with the same result.  Then we tried a quadrilateral: 360 degrees.

I asked them to make a prediction about the number of degrees inside a pentagon.  Then we tested it: 540.

I was struck dumb! I had never thought about it in this way before, but it makes perfect sense!  I was taught to divide my polygons into triangles, which have an interior angle sum of 180 degrees.

I LOVE when students can show me something new!
Email ThisBlogThis!Share to TwitterShare to FacebookShare to Pinterest