Day 151: Making Them Trust Each Other 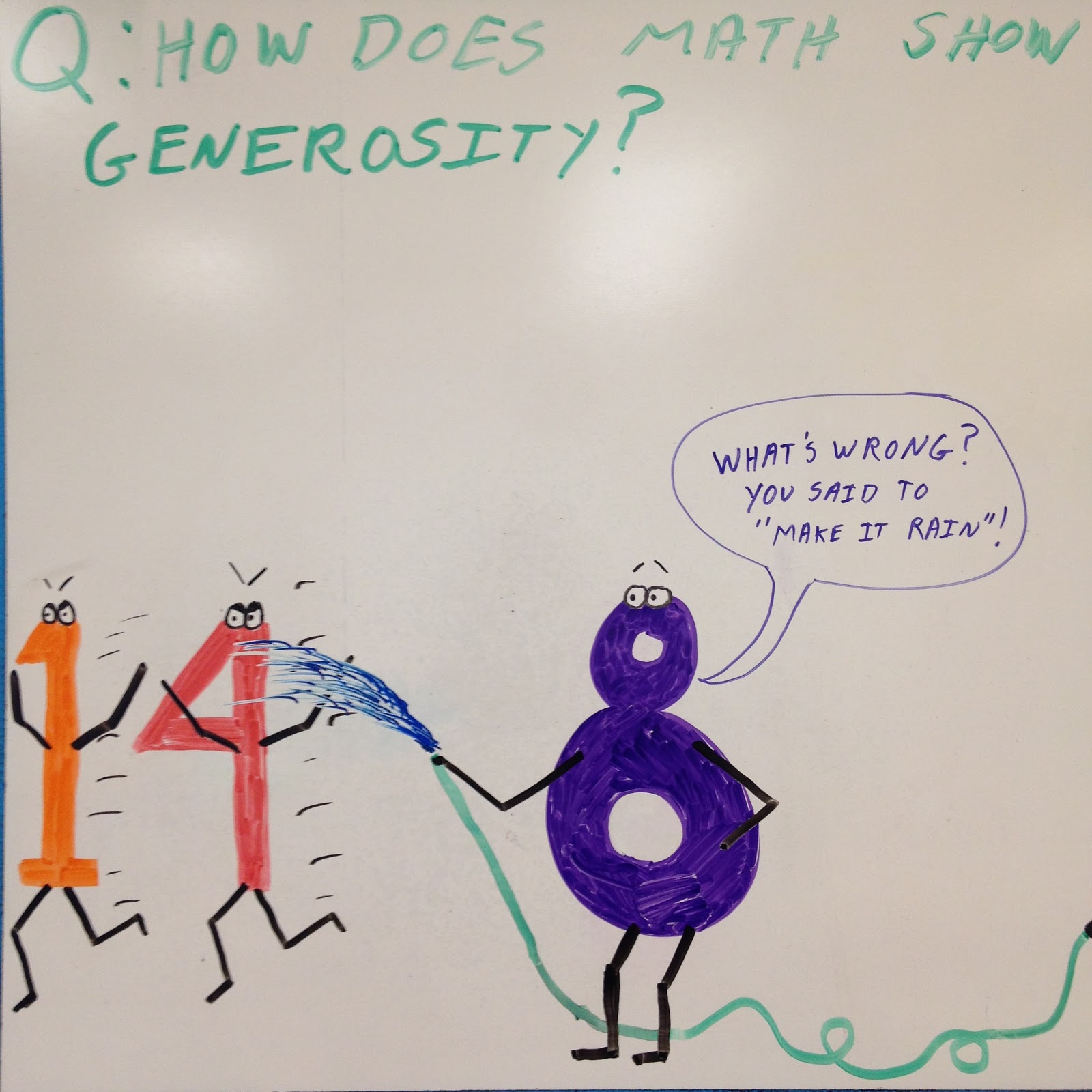 This weekend, I was invited to spend the day with Jen Silverman and Jim Doherty learning how to use GeoGebra.  It was a fantastic experience and, to be honest, I did it less for the program knowledge and more to spend time with Jen and Jim, both of whom are amazing!

It was a bit of a hike for me, but worth it for three notable reasons.  First, I took my daughters to visit with my mom and her partner outside of Philadelphia.  Second, I got to spend time with Jen and Jim and learn a ton of information about how to utilize the amazing tech tool that is GeoGebra.

Third, during the VERY large number of hours I spent in the car, I was listening to NPR podcasts.  In one of them, RadioLab out of WNYC (which, if you are not listening to, you are making a HUGE mistake.)  This particular episode talked about a British game show called Golden Balls, where contestants, in the final round, engage in a sort of Prisoner's Dilemma for the prize money.

The basic premise is this:

The final two contestants are each given a choice.  They may choose to split the pot of prize money 50/50 or they can choose to steal from their opponent.  If they both pick to split it, they split it and everyone is happy.

If, however, one person picks to split and one to steal, the person who chose to steal gets everything while the other person gets nothing.

I spent a large part of the weekend thinking about how I could do this in my classes.  When I met an old friend of mine at a diner on Saturday night, we talked about it for almost an hour and ended up writing a lesson plan on diner napkins. 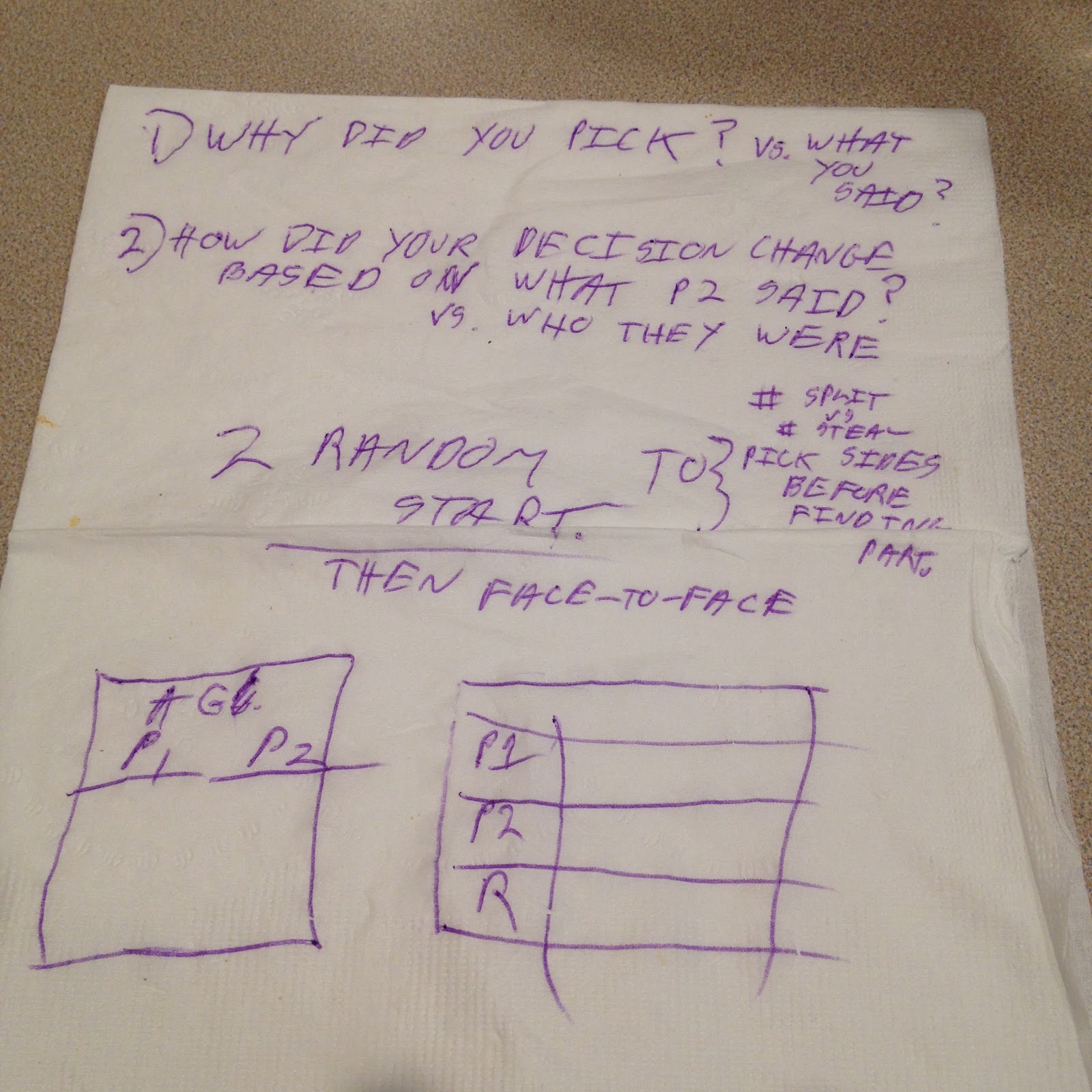 Because that's what teachers do.

We devised several versions of the game with varying degrees of information for the players.  I had them chose split or steal without knowing who they were playing against, knowing their opponent, and being able to talk to their opponent.  I had 1 students go into the hall while we picked their opponent from the class, creating imperfect information.

Then we did a tournament!

I gave every student 20 M&Ms and drew two student names from a jug.  They played the game and we kept track of the results on the white board.  Anyone who hadn't been eliminated at the end of round one could either cash out or play for more.

In Geometry, we were only able to play one tournament because we had deeper conversations about the critical thinking aspect of determining what someone else is going to do.

In period 4/5, we were able to do 2 tournaments.  In the first, there was only one group that successfully split the pot in the first round.  All of the others either stole from their opponent, or both chose steal and were both eliminated.

In the second tournament, the majority of the class made it to round 2 by successfully splitting the pot.  We had a brief talk about how cooperation, while it may seem worse for and not in your best interest, was the only way to get the optimal solution. In round 2, it became clear that almost everyone was splitting again and everyone cashed out at the end of the round.

In period 8/9, two kids simply refused to play at all, claiming that making the folded papers saying "split" and "steal" was too much work.  The class in general was also MUCH more chaotic.  They seemed more interested in throwing M&Ms at each other than eating them.


The conversations that happened while students were trying to figure out what they should pick were very interesting.  There was lots of "I PROMISE that I'll pick split" and "I don't think I can trust you to pick split."

One student came into the round saying "I don't care what you do. I'm picking steal.  I don't like chocolate and I don't like you. If I can't have some candy that I want, I don't want you to have some either."

The geometry kids made deal based on logic and weren't angry when they cheated each other.

Period 4/5 made deals based on personality and friendship and if they got cheated, were more sad and disappointed.  One students did say to another "Look, we're both the same color. If we both pick steal, then this white guy is gonna take all of our stuff."

Period 8/9 made deals based on purely selfish reasons.  More students were eliminated by both trying to steal than anything else.  Even running the tournament for a 3rd time, kids continued to try to cheat each other and were eliminated.  When this happened, they got furious at each other, yelling about what a cheater the other person was when they had picked exactly the same thing.  Many students accused their opponent of ruining it for both of them, even though both students had made the same decisions.

In both pre-algebra classes, I will be surprised if I get the reflections back tomorrow from more than half a dozen students total.  As I've said before, I don't seem to have much problem engaging them in the lessons, but the follow-through is non-existent.

My deepest thanks go out to Jedidiah Butler for making my data sheet look pretty!

I am incredibly disappointed that once again, I've tried something fun and interesting and my pre-algebra kids, not all, but many and the same ones, were indifferent.  It's getting harder and harder not to count the remaining days and say "Whatever. We have less than 30 days left. Give them worksheets and take it easy."


I am tired.  This was a great lesson for the geometry kids and half of the pre-algebra kids and I will bask in the glow of that.

But tomorrow, I have to write another blog post and draw another picture and find another way to engage my students for an hour and a half each.  It's exhausting.

Several people have asked me if I'm going to keep this blog up next year.  I would like to and, hopefully, after everything I do this summer, I'll have my energy back.  I don't know if it will be the same form, but I think writing has been very valuable for me.

The drawings, however, I think I'm done with, at least on a daily basis.  I'm finding myself more stressed about the pictures than about my lessons and that's REALLY backwards since the majority of my students don't care about them beyond a passing "huh."


Also, I found out that when I was out on Friday, there was a 20 minute span of time when my period 8/9 was left alone without a teacher.  This wasn't the fault of the covering teacher because no one told her she was supposed to be covering.

So this morning, in addition to many missing and scattered marker, about a dozen missing mini dry erase boards and my room in shambles, I found this: 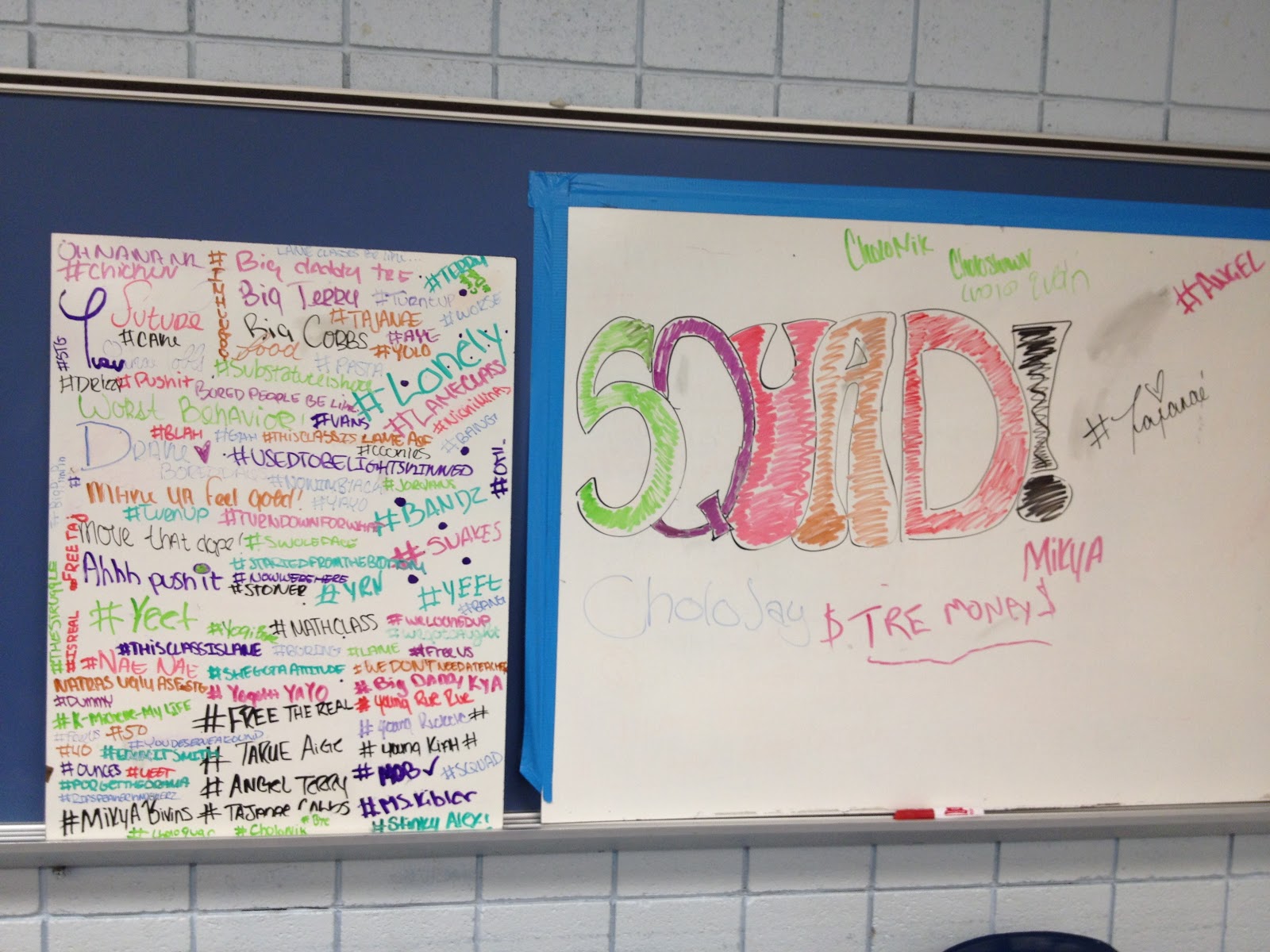 I figured that if I brought this up at all to my class, I would end up screaming at them for using/losing my markers without permission and it would lead to a bad discussion.  So I erased it and pretended I never saw it.
Email ThisBlogThis!Share to TwitterShare to FacebookShare to Pinterest